MAFTTI, Mankato Fair Trade Town Initiative, came into existence in May-June 2009 after a visit to Mankato by two Peruvian cooperative workers, Eva Pizarro (from Lima) and Ayde Riveros (from Huancavelica, high in the Andes). They visited during a Midwest program organized by Green America and Partners for Just Trade. 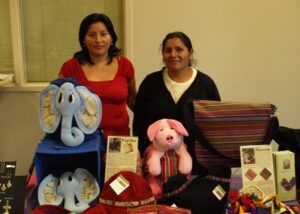 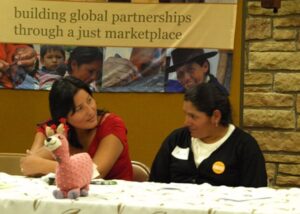 Eva (left) and Ayde spoke at a public meeting at Christ the King Lutheran Church on May 5 and exhibited some of the products – handcrafts and jewelry – made by them and their cooperative associates back home.

Such was the response from the 65-strong audience that the local receiving group – the Churches’ Fair Trade Network – decided to turn itself into a Fair Trade Town project and join a young national campaign which, at that time, mustered just 11 Fair Trade Towns in eight states.

One of MAFTTI’s first acts was to embark on a survey to establish where Fair Trade products were available in the Mankato area. The main sources, not surprisingly, were in the four major food stores, all located in Mankato.  Two, Cub Foods West and Cub Foods East, were part of the SuperValu chain (HQ in Minneapolis). Two belonged to Hy-Vee (HQ in Des Moines, Iowa.) MAFTTI also found a number of smaller retail outlets that carried examples of Fair Trade products.

MAFTTI made an initial presentation to the Mankato City Council on June 22, 2009 and took part in a Council Working Session on April 26, 2010.  This resulted in a Proclamation of support being signed on May 10 by the then Mayor John Brady and President At-Large Michael Laven. 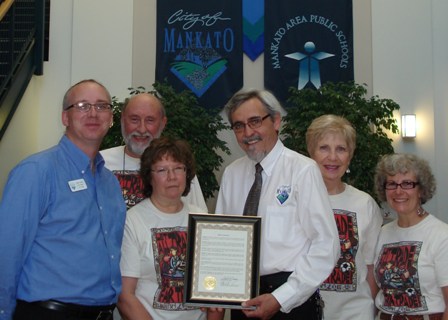 In the following 18 months MAFTTI continued to try to broaden the local retail base of Fair Trade, increase public awareness of Fair Trade through the churches, at the Farmers’ Market in the summer, on Parades (North Mankato Fun Days Parade and the Homecoming Parade at Mankato campus of Minnesota State University – above right), at events where exhibition space was available – Greater Mankato Growth’s annual Campus and Community Fair at MSU; ar the Blue Earth County Library in Mankato (below) and the Mankato Area International Festival (below right) 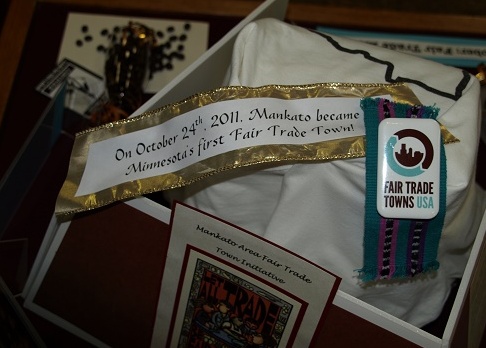 The media was also cultivated, especially radio and the local newspaper. On September 5, 2011, after a meeting between MAFTTI and the Editorial Board of the Mankato Free Press, a supportive editorial appeared entitled “Fair Trade is a Sound Idea”.

On September 26, 2011 MAFTTI took part in another Working Session with the Mankato City Council and presented evidence that the criteria of the national Fair Trade Towns campaign had been met, indeed exceeded. This meeting paved the way for consideration of a Fair Trade Town Declaration at the Council Meeting on October 24.

On October 24 the Council unanimously passed a Resolution containing the Declaration!  Not long afterwards MAFTTI produced this celebratory poster and distributed it for posting widely in the area.

Mankato became the FIRST FAIR TRADE TOWN IN MINNESOTA, and the 25th in the nation. Celebration was in order! 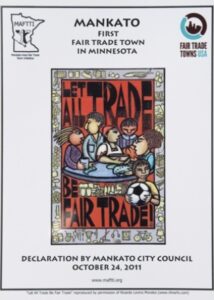 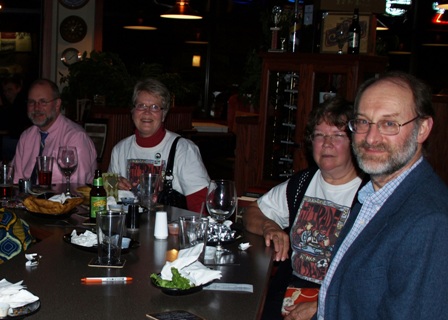